Our house is a very special place; it is where we spend most of our time, either sleeping or having fun in our room; cooking, eating or spending quality time with our family; that is why it is an essential space and each one tries to make it as pleasant as possible according to our tastes and needs.

Can you imagine living in any of the houses of your favorite cartoon characters? Well, some people around the world fulfilled that dream and ordered the construction of replicas of cartoon houses. We show you the most beautiful and impressive cartoon houses exist in the real world. 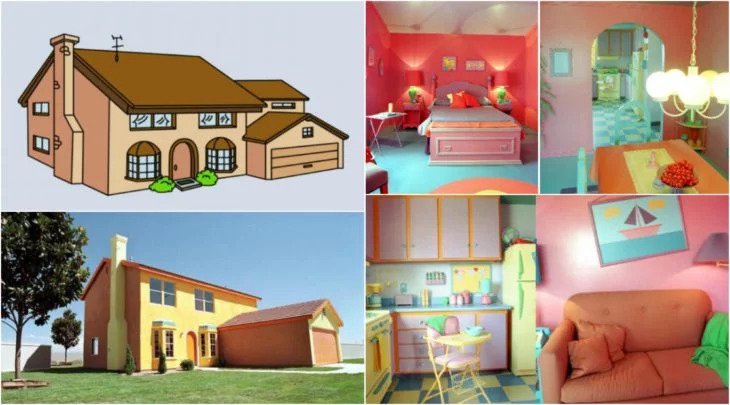 In 1997 Fox  launched a contest to build a real replica of the Simpsons house, the winner was built in Henderson, Nevada. For the elaboration of the residence, the builders analyzed 100 episodes of the cartoon to recreate every detail of the famous house of Homer, Marge, Bart, Lisa and Maggie. Matt Groening himself was present at the opening. Currently the house is painted another color since a family bought it and lives there.

Who does not remember Heidi and the grandfather in the house of the fir trees, his friend Pedro and Snowflake? For the replica of the home of this charming girl is in northern Switzerland, two hours uphill from Heididorf, near the town of Maienfeld. All along the way, you can see a beautiful landscape of mountains and trees, the only difference you will find is that in the postcard photo, instead of goats, it is cows that surround the house. 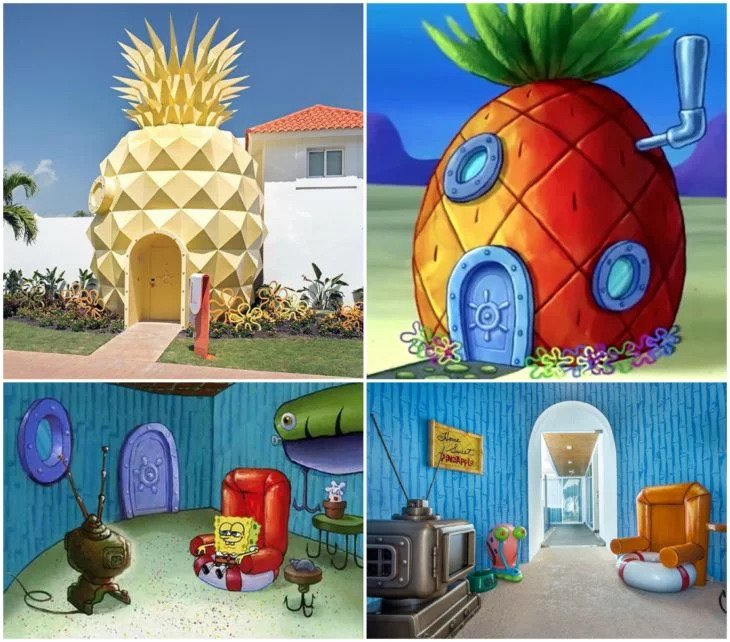 Live in a pineapple under the sea! Now not only SpongeBob lives in a pineapple, you can also do it, although technically this pineapple is not a house, it is a hotel module for the whole family that includes two bedrooms, three bathrooms, a dining room and a Gary. It is located in Punta Cana, Dominican Republic and is part of a resort of Nickelodeon – inspired Bikini Bottom. 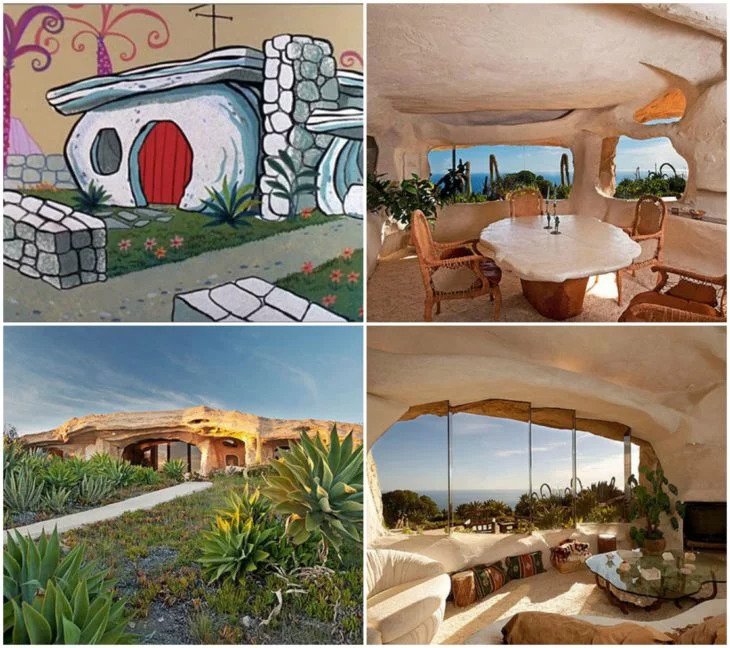 This reproduction built on the beaches of Malibu, is made of rock, has a value of three million 250 thousand dollars, and the best of all is that it has its private beach. The only drawback it has is that there are no prehistoric creatures around; the furniture is made of natural materials similar to those in the cartoon series. Even some windows look like the Flintstones.

5. The house of Minnie Mouse 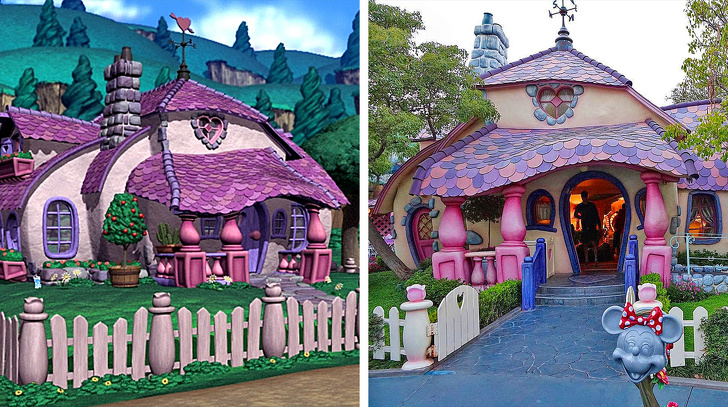 It is a replica that is located in the Magic Kingdom park of Walt Disney World, within an area called  Toon Town where you can also find the houses of Mickey, Donald and Goofy. Users can enter and tour it by themselves. All the parts of a house: living room, dining room, kitchen, bedrooms and everything is set in the pure sweet Disney style . 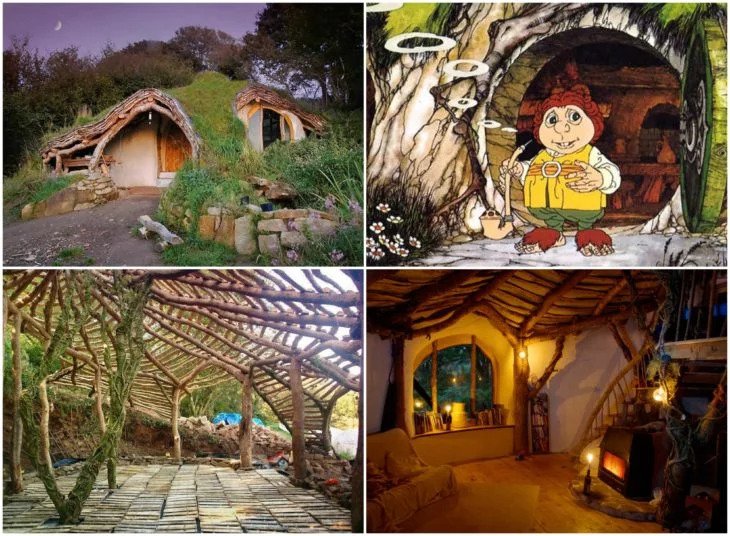 This house was built by a Briton named Simon Dale, in Wales. Despite not being an architect or carpenter, Simón was put into action with the help of his father-in-law and people passing through the place; They finished it in four months and cost approximately three thousand pounds. The house is ecological and is visited by fans of the saga.

7. The house of Snow White 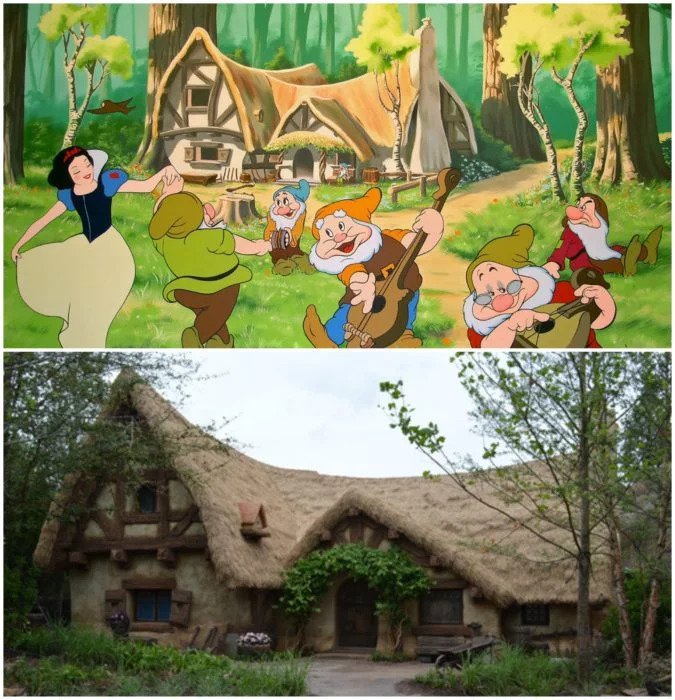 This charming house was built in the 70s for a woman named Karen Morgan, a movie fan. They began to build it in parts and were amazed by the resemblance to the original. In 2005 it was bought by Evonne Bess and added more details inside. You can visit it in Olalla, a town near Seattle, United States.

8. The house in the style of the Millennium Falcon 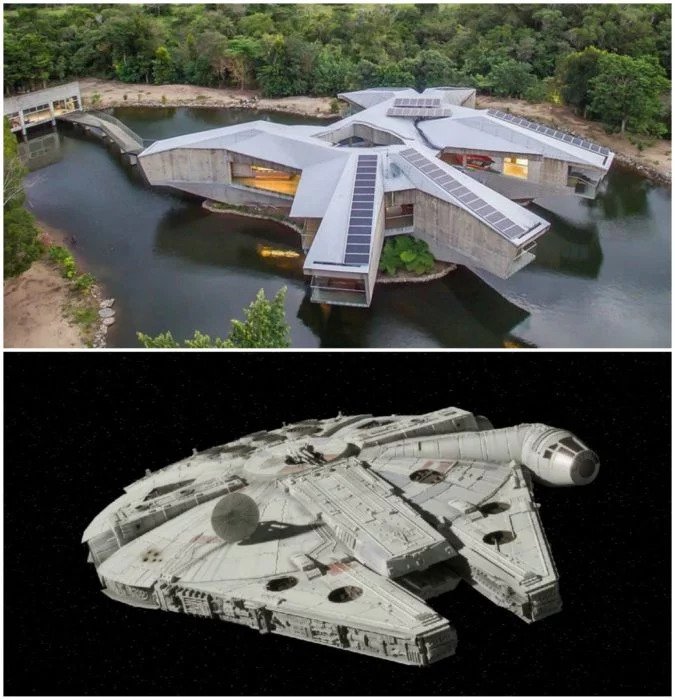 In a completely futuristic style this house built with concrete, steel and wood belongs to Rod Perry, a Star Wars fan , who tried to be as close to the Millennium Falcon, Han Solo and Chewbacca’s ship. It is located in Queensland, Australia.

Located in Berlin, Germany, this house is built in real size, is interactive and everything, absolutely everything, is pink and violet. Visitors can try on Barbie’s clothes, play the piano, bake virtual cupcakes and meet her pets. The reason for its construction was the 50th anniversary of the emblematic doll, based on the dream mansion in Malibu.

For all the fans of this kitten, this house was designed by Ikuko Shimizu, the creator of Hello Kitty.  The beautiful residence is in Shanghai, China. It is mostly pink and all its interior has Hello Kitty accessories, flowers and ribbons abound as decorative details.