We all remember playing netball, probably in our school years. In recent years with the success of the England Women’s Netball team, the sport has grown in popularity. While your children might already play netball at school, it is definitely worth pursuing outside of PE lessons. Here we take a look at six benefits of playing netball for children. 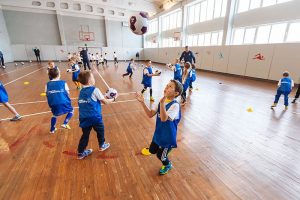 Children should be active every day. Peeling them away from their screens can be difficult, but the joy of a team sport like netball can help. Being active for an hour a day benefits children in many ways. The Change 4 Life initiative has inspired young people to get active so they can improve their health and well-being.

Netball gives you an all-over body workout. The running, the sprinting, the stopping and starting and quickly changing direction give your children an excellent cardiovascular workout.

Throwing and catching the ball requires skill in the fast-paced game of netball. You have to shoot or pass within three seconds of getting the ball, and the score net has no backboard, so accuracy is key. You can work on all the throwing and passing techniques with your child and hone their skills with resources such as https://www.sportplan.net/drills/Netball/Warm-ups/10-Balls-Anywhere-TBN0044.jsp. They will get faster and sharper with every drill! 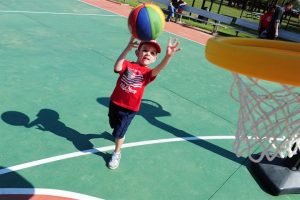 The rules of netball give each player a position to play and their own area of the court. The Goal Attack, the Centre, the Wing Attack – they all have their own moves and plays. Sound complex? It isn’t! Netball training videos on the internet like this one demonstrate the player positions – https://www.youtube.com/watch?v=aBuxsRnU50A&t=8s

Netball is of course a team sport. Children playing will learn to work together, and netball improves skills in listening to and giving instructions.

Netball doesn’t need expensive accessories. You need a pair of sports shoes and a ball and off you go. You can, of course, book time on a proper netball court, both indoors and outdoors.

So don’t think of netball as just belonging in your school days or only for your child’s PE lessons. Get out there, get a ball, get your child’s friends together and start shooting those goals on the court!